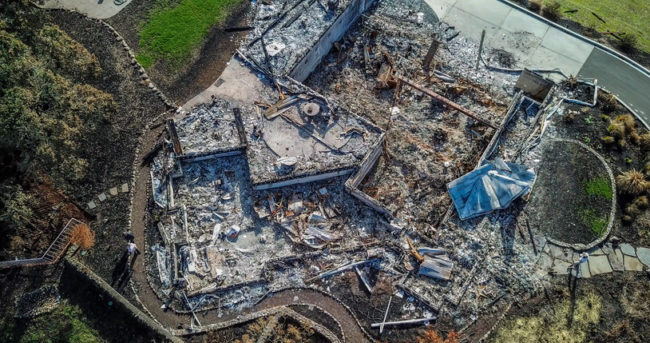 Late last year, we reported on the looming environmental threat of the 2017 California wildfires. The threat has become reality with respect to two contaminants in particular: benzene and arsenic.

As reconstruction moves forward in Northern California this year, real human health hazards created by the devastating fires are now present. Municipal officials in Fountaingrove, California have found elevated benzene readings in hundreds of samples of drinking water over the last several months, and the city is evaluating the necessity of replacing large portions of its potable water delivery system at great cost. In addition, high arsenic levels have also been discovered in the soil in that area, hindering efforts at rebuilding, and causing officials to re-evaluate environmental standards and ask, “How clean is clean in order to rebuild?”

The Benzene/Wildfire Issue
Typically, benzene contamination is associated with petroleum or petrochemical operations. In the aftermath of the Tubbs fire that burned 37,000 acres in Sonoma and Napa Counties, however, officials are theorizing that the post-blaze water contamination involving benzene is emanating from fire-damaged high-density polyethylene water service lines in the area. They believe that various plastic components in the water system melted during the fires, and that the resulting chemicals and contaminants were sucked back into the water supply when pressure dropped due to high demands on the system from firefighters, and from water release from destroyed homes. Evaluation of the existing water system is ongoing.

The Arsenic/Wildfire Issue
While arsenic naturally occurs in soils, particularly in areas where volcanic ash gathered over millennia, it varies significantly between geologic zones. The variances and massive cleanup facing builders and residents and the threshold level requirements in soul before building have presented significant challenges.

As a necessary part of obtaining building permits in the fire clean-up in Northern California, soil samples must be tested for arsenic. Acceptable levels vary for different areas, given naturally occurring geological differences in the soils. In late February of this year, Sonoma County raised its acceptable standards for arsenic in the soil from 7 parts per million to 22 parts per million for some areas hit hard by the fire.

While the raising of the standards will certainly boost rebuilding efforts, it could lead to further health hazards and issues in the future. One thing remains certain— the environmental challenges due to the devastating wildfires are having an impact on the recovery and rebuilding process and forcing the question, “How clean is clean?”