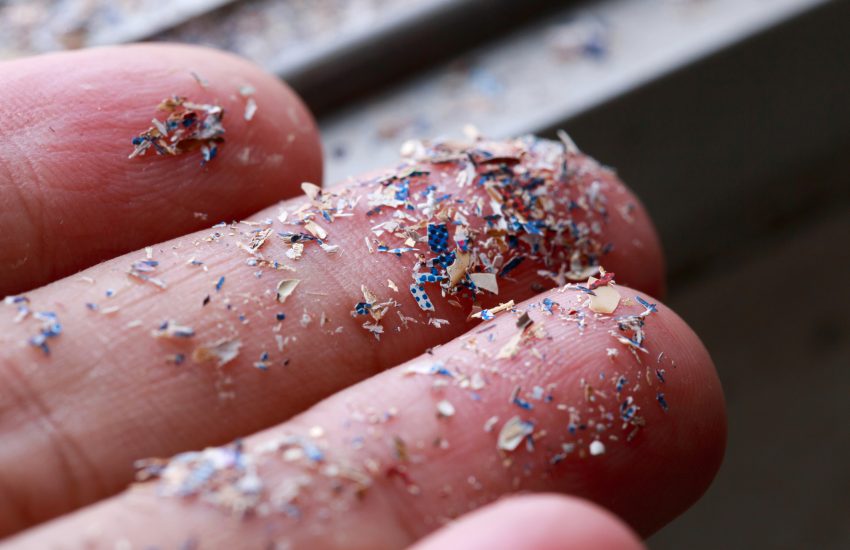 In a world where everything is supersized, or perhaps more appropriately venti sized (because let’s be honest, anything less than a venti pumpkin latte is simply not adequate), we tend to overlook what isn’t pronounced. However, recent headlines involving the fate of our littlest constituents remind us that we should be paying more attention to the inconspicuous things in life for, as it turns out, the microsized may be the most threatening. Yes, it is arguably Darwinian to disregard the discreet dangers, ones that we cannot easily detect, like microplastics, and focus instead on the more conspicuous perils that we can readily perceive. Yet, following status quo may lead to grave environmental crisis and health risks to our most vulnerable population: babies. And let’s face it, while no one wants or intends to harm a baby, everyone will shame those who do. That means, right now, industry is under the microscope for its use of microplastics and the harm derivatively inflicted on “micro” humans.

Much of the watchdog vigor has been on bringing down the peddlers of big plastic (i.e. water bottles and food/beverage packaging) for polluting our waters. Indeed, there is great momentum behind the anti-plastic movement to protect the wildlife that inhabits those waters. A large part of this campaign involves protecting aquatic life, such as copepods, mussels, worms, fish, and seabirds, from ingesting microplastics, which transfer chemical contaminants into aquatic biota and are believed to impair their ability to feed. However, we now know the harm of microplastics is an epidemic that extends beyond our waters. The reality is that while big plastics travel great distances, visibly polluting ecosystems all over the place, microplastics are airborne and ubiquitous—an invisible menace that will undoubtedly bring about a new wave of liability for plastic exposure. Recent headlines citing infant fecal matter laden with microplastics, coupled with images of smiling babies gnawing plastic teethers, sucking plastic bottles, and soothed by plastic pacifiers, is simply fodder for imminent litigation.

What exactly are microplastics?

At the risk of stating the obvious, microplastics are extremely small pieces of plastic, typically less than 5 millimeters (0.2 inches) in size and formed in a variety of ways. Some are produced when large plastics fragment into small plastics that subsequently fracture into even tinier pieces, which are then susceptible to wind entrainment. Whole other types of microplastics are generated when clothing, made of synthetic fibers, is laundered, filtering into groundwater that funnels into waterways, and ultimately makes its way into our drinking water supply. Microplastics are also often deliberately added to consumable products (e.g. paint, construction materials, and personal care products to name a few). A large part of the problem with microplastics is that they are not biodegradable and can persist in the environment for many years. For example, plastics left on the surface photodegrade, biodegrade, and mechanically degrade, but for plastics in sediment or covered with a biofilm, degradation lasts decades.

Microplastics found in the feces of babies in alarming amounts

We have established that microplastics are everywhere, so it should come as no surprise that we ingest plastic too, and do so as a result of eating from plastic containers. A new study shows, somewhat shockingly, that babies have greater concentrations of microplastics in their guts when compared to the adults living in the same area. Specifically, markedly higher concentrations of microplastics were found in the feces of six one-year-old babies in New York City than in the feces of ten NYC adults. On average, infant feces contained over ten times more PET than adult feces. The findings suggest that infants may have greater exposure to microplastics than adults due to factors such as plastic feeding utensils, pacifiers, sippy cups, teething toys, and even polyester textiles because infants often chew and suck on clothing. Even the meconium (first stool) of three NYC newborns showed concentrations of microplastics closer to those of adults, suggesting fetuses are vulnerable; even the womb is not a safe harbor from microplastics.

Though the residual health impact of ingesting microplastics remains uncertain, recent studies suggest that microplastics below a certain size threshold have the potential to cross cell membranes and enter into the circulatory system and therein negatively impact cell function and the immune system. Plastics also contain a myriad of chemicals, including endocrine disruptors that could potentially disrupt the body’s hormones and have been linked to adverse effects on metabolism (e.g. obesity), as well as reproductive and neurological health. Babies are especially vulnerable to these effects since they are still growing and developing.

Targeting industry as the source of microplastics and what’s next

Researching plastics in the ocean, where gyres are swirling in international waters, it is difficult to attribute responsibility for the pollution. However, researchers narrowed their focus to the Great Lakes, which (akin to any river or lake) allows scientists to pinpoint and assign accountability. For example, a significant source of microplastics in the Great Lakes was found to be facial scrubs and body washes, which contain microplastic beads that seemingly act as benign exfoliants to help remove dead cells from the surface of your skin, but terrorize aquatic ecosystems. As a result, major manufacturers have swapped out microplastic beads with alternative exfoliating agents that are more biodegradable. States are also leading a legislative charge against industry. In fact, in 2014 Illinois became the first state to ban the manufacture and sale of personal care products containing microbeads; fifteen states followed suit. That same year, California banned single-use plastic bags, followed by Hawaii, New York, Connecticut, Delaware, Maine, Oregon, and Vermont issuing de facto bans on various forms of single-use plastic packaging. In 2018, California adopted a definition of microplastics outlining size and composition parameters and established a standard methodology for testing drinking water, making it the first state to define and require testing for microplastics in drinking water. Since then, there have been an onslaught of environmental citizen suits against federal and state agencies, the Army Corps, and private companies. Given the heightened media attention to plastics, microplastics-related litigation in the environmental arena is likely to boom, especially in the form of increased citizen suits brought under the CWA, RCRA, and potentially the CAA. Undoubtedly, the NYC study of microplastics in feces will trigger a surge of further studies—which means more babies, more spatulas, and more poop talk.

So what is the micro-sized takeaway?

At the risk of sounding blasé, we already know that plastics are likely linked to climate change. Plastics, which are made from fossil fuels, account for twenty percent of total oil consumption, and their manufacture, recycling, and incineration is energy intensive, resulting in an output of high carbon emissions. Plastics already threaten insurance and investment portfolios, and now, with babies in the headlines, there is certain to be additional backlash against big plastic not only for its discernible pollution of marine life and newly detected presence in babies’ fecal matter, but also for its potential airborne assault on the planet’s most vulnerable beings.

Recent headlines should be a wakeup call to plastic peddlers and should likewise put shareholders on high alert. The fight against plastics is no longer limited to environmental watchdogs campaigning against climate change, but now includes a panicked coalition of parents looking for who to blame for unforeseeable health complications down the road. Banks and other financial institutions, subject to the momentum of climate change and faced with babies-at-risk headlines, may be inclined to scrutinize industry more closely for how it interacts with and manages plastics. For example, if a company has violations, a perceived lack of due diligence or new discoveries of microfiber production may worsen its risk exposure (i.e. don’t invest in this company—there is evidence that they are poisoning babies and polluting the air with microplastics).

That being said, microplastics pollution presents a significant opportunity for industry and insurers to position themselves on the frontlines in securing a more sustainable future, by not only recognizing their responsibility, but by committing to promote environmental sustainability. The microsized takeaway is UMM: Understand, Manage, and Mitigate the risk posed by microplastics exposure now, because efforts on the front end translate to savings on the back end.