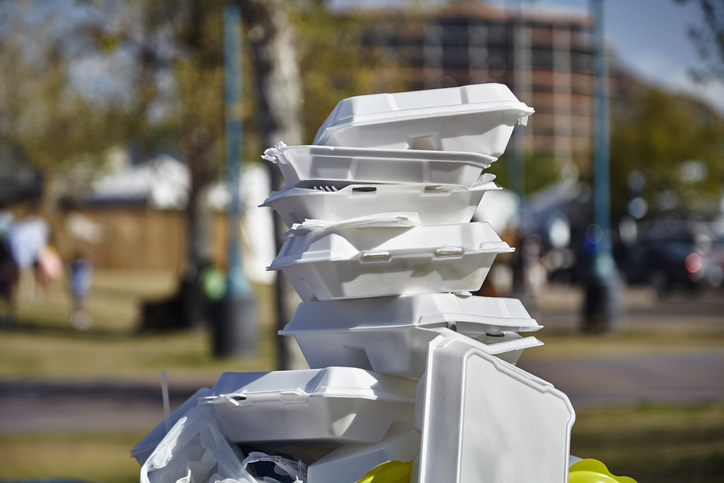 Florida’s Third District Court of Appeal recently struck down a 2016 Coral Gables’ law that prohibited the sale and use of food-related polystyrene containers (i.e., Styrofoam) by food service providers and stores. This decision reverses a trial court decision granting a motion for summary judgment in favor of the city and finding that the three state laws in question were unconstitutional.

In its decision, written by Judge Norma S. Lindsey, the Florida Third District Court of Appeal held that the ordinance was preempted by three Florida statutes: Section 403.708(9) (providing that the “packaging of products manufactured or sold in the state may not be controlled by governmental rule, regulation or ordinance”), Section 403.7033 (prohibiting local governments from enacting any laws regarding the “use, disposition, sale, prohibition restriction, or tax of …   auxiliary containers, wrappings, or disposable plastic bags”), and Section 500.90 (preempting the “regulation of the use or sale of polystyrene products” by local ordinances enacted after January 1, 2016).

The trial court found that these three statutes were unconstitutionally vague in violation of the nondelegation doctrine as failing to define guidelines or standards for implementation of the laws. The Third District Court of Appeals held that there was no unconstitutional delegation of lawmaking in Sections 403.708(9) and 403.7033 because neither statute delegates any legislative authority. Looking at the plain language of the statutes, the court held that a prohibition against states from selling polystyrene container products required no further standards or guidelines to be developed by the state agencies for implementation and thus did not delegate any additional authority to these agencies. Furthermore, regarding Section 500.90, the court rebuffed all three of the trial court’s justifications for finding the statute unconstitutional, including a similar nondelegation argument, purported violation of the Miami-Dade County’s home-rule amendment, and an alleged impermissible classification scheme.

After determining that the three state statutes were constitutional, the court further held that the state laws expressly preempted the Coral Gables polystyrene ordinance. It found that the plain text of each of the three state statutes was clear and unambiguous such that the city ordinance banning polystyrene containers could be considered preempted. Specifically, sSection 403.708(9), prohibits regulatory control over the “packaging of products manufactured and sold in the state”, Section 403.7033 prohibits the regulation of “auxiliary containers”, and Section 500.90 prohibits regulation of “polystyrene products.” The court held that it was clear that the Coral Gables law restricting polystyrene containers would run afoul of each of the language in each of the three statutes.

This decision has the potential to significantly inhibit the ability of Florida localities from tackling an area of particular recent national environmental interest: plastic packaging. While other states and municipalities continue to turn their attention to restricting the sale and use of products proven to have a negative long-term environmental impact, such as Maine which has banned the single-use polystyrene containers at issue in this case, Seattle with its broad ban on plastic straws, and eight different states’ and multiple cities’ bans on single-use plastic bags, it appears that the Florida Third District Court of Appeals’ decision reflects a prioritization of business autonomy over eco-friendly regulation. It is unclear whether the city plans to appeal to the Florida Supreme Court, but if the number of amicus briefs filed by other Florida municipalities and environmental organizations is any indication, this constitutional fight against these restrictive laws is not likely to fade anytime soon.