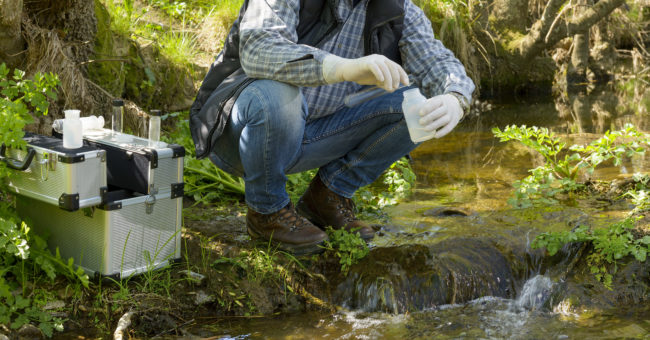 It’s no secret that more and more states are investigating PFAS chemicals to determine whether regulation is wise. The U.S. Government has been grappling with the same issues. Contaminants of emerging concern (CECs), including PFAS, are of great interest to regulators, water treatment utilities, the general public and scientists. When considering, for example, 2016 data collected by federal scientists that estimates that up to 110 million people are served by water supplies with PFAS, investigation is important. As we are well aware though, the federal government has no maximum contaminant levels (MCLs) for PFAS chemicals. The EPA has only issued non-enforceable and non-regulatory “health advisories” for PFAS, which establish a health advisory level of 70 parts per trillion for certain PFAS compounds.

Many states that have taken interest in PFAS regulations have adopted regulations substantially lower than the EPA’s advisories. For example, New Jersey has a strict limit of 13 ppt for perfluorooctane sulfonate (PFOS) and 14 ppt for perfluorooctanoic acid (PFOA)—the level at which New Jersey believes human health would be protected over a lifetime of exposure. Vermont has a combined PFOA and PFOS MCL of 20 ppt. And Minnesota has a Health Risk Limit for PFOS in drinking water of 27 ppt. Other states like New York and Pennsylvania are poised to adopt strict standards, and certain environmental groups have proposed a level of 6 ppt, which is more than 10 times tougher than the current EPA standards. And still more strict, the Union for Concerned Scientists suggest levels between 7 to 11 ppt.

The study takes note that only one DWTP exceeded the EPA’s health advisory threshold, but that PFAS compounds were “qualitatively detected in the source and treated drinking water of every sampled location.” However, as explained above, the EPA’s health advisory standards are far less strict than many states. Assuming that the states with stricter standards have a more accurate view of the importance of PFAS regulation, then this study found concentrations in 7 DWTPs that would have been in excess of particular state regulations. And if we assume that the environmental groups and the Union for Concerned Scientists might have the most accurate perspective on proper health levels, then 11 out of 25 DWTPs had excessive concentrations of PFAS.

The study also makes note that the efficacy of treatment systems for removal of PFAS were lacking as the differences in PFAS concentration between the source sample and the treated drinking water were not significant. “Overall compositions and concentrations were similar between source and treated water at a given location.” In several DWTPs, the treated drinking water had a higher concentration of PFAS than the source water. The study explains this by noting recent studies that have “demonstrated the possibility of PFOS and PFOA generation from precursor compounds during drinking water treatment.” The study explains that “Granular activated carbon (GAC) is one of the few treatment processes that has demonstrated significant PFAS removal from water,” although at a high cost. The study found that the DWTPs that recharged their GAC treatment beds most frequently experienced the largest concentration reductions from source to treated water.

Tougher PFAS standards could force U.S. drinking water suppliers to spend billions of dollars to remove the chemicals from water supplies. They could also require users of the chemicals to pay for environmental remediation and potentially personal injury damages. Yet, still the science is out on the impact these chemicals have on human health. As supported by the federal government’s recent study, PFAS chemicals are ubiquitous in the environment, and their frequent study will continue to highlight their notoriety.