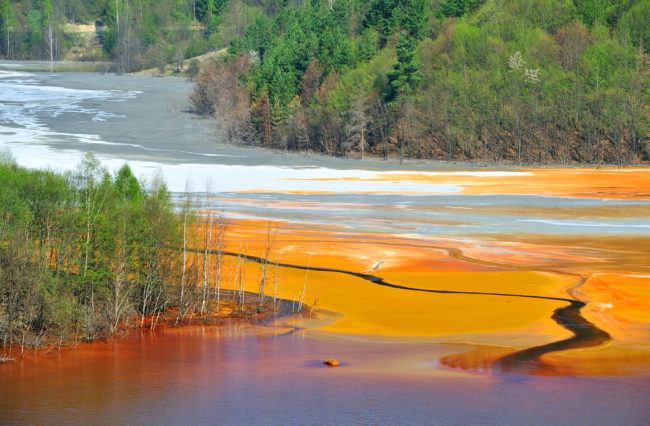 An industrial accident last month at the Hi-Crush mine in Whitehall, Wisconsin is shaping-up to have some potentially significant environmental effects. A contractor’s bulldozer slid into a deep settling basin at the mine in western Wisconsin, leading to an hours-long effort to rescue the man from a 15-foot-deep pond. Rescuers freed the driver after emptying an estimated 10 million gallons of water from the pond into a Trempealeau River tributary. The settling basin contained a large amount of sludge- water, mixed with sand and chemicals. The release tinted waterways orange, flooding fields as the plume swept downstream into a wildlife refuge and the Mississippi River a few days later. Initially, the pond spillage near the border of the 1,447-acre mine was believed to be mostly water, sand, clay and silt, according to company officials.

The Wisconsin Department of Natural Resources (DNR) began testing the water for metals and other chemicals used in sand mining. Those test results showed high levels of arsenic, lead and other contaminants at the source of a spill. Specifically,  the results demonstrated lead concentrations over 10 times the allowable levels for drinking water, and arsenic at levels nearly seven times the safe levels. The DNR, however, said samples taken from the Trempealeau River downstream from the spill met state surface water standards with oxygen levels there able to support aquatic life.

Hi-Crush said that it’s making steady progress toward cleaning up the area and remediation. “We do not expect further sample results to show any issues of concern for the community,” the statement said.

Given the scope and nature of the chemicals involved in the spill, it seems likely litigation will follow as the affected parties seek resolution on the costs of the clean-up and the potential long term effects of the spill.