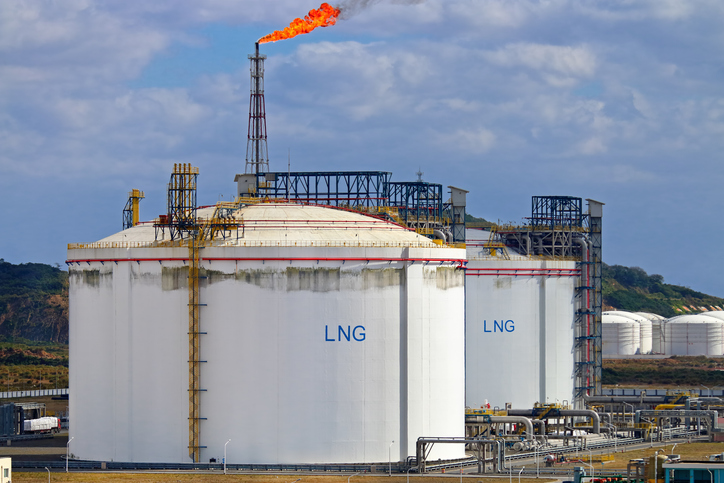 Earlier this year, the New Jersey Department of Environmental Protection (NJDEP) approved a permit for construction of the state’s first ever liquefied natural gas (LNG) export terminal at the site of a former chemical plant along the Delaware River in southern New Jersey. Environmental groups have now challenged the issuance of that permit, bringing additional public scrutiny and attention to this large-scale and controversial energy initiative.

The liquefaction process of natural gas consists of lowering its temperature to approximately negative 260 degrees Fahrenheit. It is then transported in its liquid form via tanker trucks and subsequently re-gasified into its original state. Re-gasification involves passing LNG through a series of vaporizers that reheat the fuel, where it is repackaged again for distribution and sale. LNG is far less voluminous than it is in as a gas—the liquid form is roughly 1/600th the volume of the same amount of natural gas.

The environmental groups’ legal challenge, filed in the New Jersey Superior Court Appellate Division, asserts that NJDEP’s approval is “arbitrary, unreasonable, not supported by the record, and contrary to law” because, among several reasons, officials allegedly did not have enough evidence to determine whether the project would have a detrimental impact on water quality, thereby violating New Jersey’s Coastal Zone Management (CZM) regulations.

The complaint primarily contends that NJDEP erroneously issued the construction permit because they did not require a prerequisite storm water permit or require the developer to conduct an investigation into contamination at the proposed terminal property, which is a 370-acre superfund site that previously manufactured explosives and other chemicals.

Specifically with regard to water contamination, the environmentalists argue that the developer’s proposal, and NJDEP’s subsequent authorization, failed to address legitimate concerns relative to ongoing site remediation and the impacts of the proposed project on the release of contaminants. The appeal cites the presence of two potentially hazardous compounds:

1. Aniline, a pungently odored and volatile phenyl that ignites easily

The environmentalists further contend that CZM regulations would be violated due to runoff from the site and in riverbed sediments at or near the site. They allege that NJDEP had no data from which to make a water quality assessment and, therefore, NJDEP’s conclusion that no environmental damage would occur if the LNG terminal is constructed and set into operation is wholly unsupported.

While the environmentalists’ lawsuit asserts potential environmental-impact issues associated with the pre-existing condition of the LNG site, they also argue that the process of transporting LNG and recalibrating its state of matter from a liquid into a gas can also present hazards. For example, if LNG is spilled inside a contained area where the vapors cannot dissipate, an explosion could occur if an ignition source is present. Additionally, ruptures in LNG tanks can pose severe danger, such as via highway accident of an LNG transport truck or a weapon attack, both of which could cause an explosion. Further, the cryogenic nature of LNG can cause severe burns if it comes into contact with skin and methane (the primary compound present in LNG) can be an asphyxiant if released in an enclosed space.

While the current lawsuit is pending, the LNG terminal needs additional permits from a number of federal and state agencies including the U.S. Army Corps of Engineers, the Coast Guard, the Department of Energy, and the Delaware River Basin Commission.