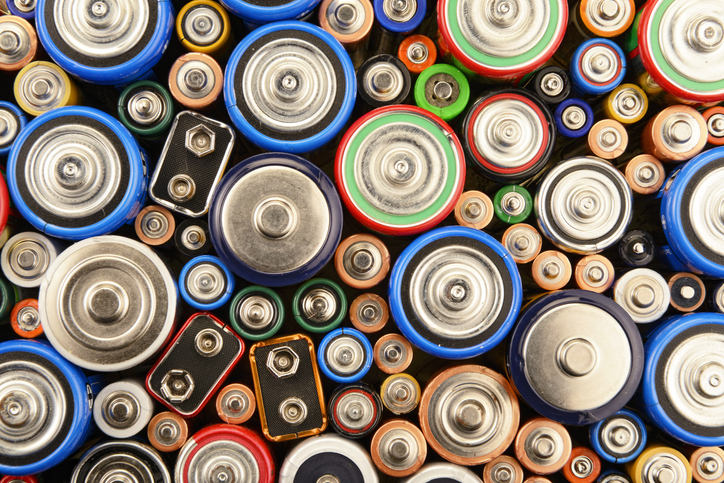 The principals of electrochemical power have been known for more than 200 years. Two specific chemicals are stored in a battery, separated by a third chemical called an “electrolyte.” When placed in a closed circuit (the device needing power), one of the chemicals reacts with the electrolyte and produces a higher concentration of electrons at the negative terminal, the “anode,” than at the positive terminal, the “cathode.” The electrons then run from the anode, through the device powering it, to the cathode, until the concentration is equal at both terminals and the battery (and your device) is ‘dead.’

Most conventional batteries, i.e., the Energizers and Duracells that we all grew up with, use a manganese compound at the cathode and a zinc compound at the anode — and e.g., ammonium chloride or potassium hydroxide as the electrolyte.

However, as our devices have gotten smaller and more complicated, requiring greater amounts of power to run, manufacturers discovered in the 1990s that Li-ion batteries produce a much higher concentration of electrons at the anode than conventional materials, producing two and three times the electrical power in the same size package. Li-ion batteries are also rechargeable and do not tend to suffer diminishing charge capacity upon being recharged.

The use of, and demand for, Li-ion batteries has skyrocketed approximately a 20-percent increase every year since their introduction.

As their ubiquity has grown, however, the potential pitfalls of their use has become more apparent: Li-ion batteries are much more sensitive to high-heat environments. Also, the electrolyte barrier between the electrodes in a Li-ion battery, commonly a lithium salt solution, can evaporate if overheated, causing a short circuit. This short, in turn, can result in a “thermal runaway,” where a Li-ion cell heats itself rapidly and uncontrollably, to the point of combustion and fire. This risk of fire is magnified when Li-ion cells are grouped together in a single battery, as they most often are.

The time required for one Li-ion cell to overheat the surrounding cells in a battery is also measured in milliseconds. To grasp the practical effect of this, one need only look back to the “exploding hover-board” epidemic of a few years ago, where non-market chargers, substandard parts, and heedlessness of charging instructions led to dozens-if-not-hundreds of hover boards literally ‘bursting’ into flame because of their over-heated Li-ion batteries.

Research is currently underway, however, to use a thermally-responsive shape polymer that would conduct electrons as in a standard Li-ion cell when a charge is passed through it, but become an insulator when heated excessively. Under standard usage temperatures, this new polymer technology continues work with high conductivity, minimal resistance, and traditional battery life.

While the dangers are real, the market has spoken, and decided to address them rather than abandon the versatility and raw power of Li-ion batteries. They are, for now, here to stay.